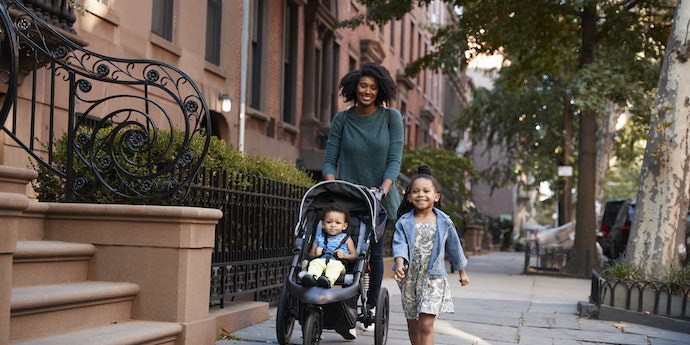 Siblings—that’s all I need to say to make about half of you reading this roll your eyes. You love them, but they drive you crazy. You can’t stand them, but you find yourself deeply concerned about their wellbeing anyway. Having siblings, although very rewarding, can be challenging, and being the oldest sibling is especially difficult for two reasons: 1) you probably remember what it was like to be the only child, and 2) you are expected to be responsible for your younger siblings. So, here are 10 books to help kids adjust to becoming “part of a set.”

One of the most commonly used books to introduce children to their new role as “the oldest” for a reason. It’s straightforward, sweet, informative, and frames the arrival of the new baby in a positive light for the existing child; plus, there’s a version for boys and girls (the text is pretty much identical, but children sometimes have trouble identifying with the opposite gender). Good for ages 3 to 7.

This book is also a sweet, informative introduction to the idea of having a new little sibling which frames the whole experience in a very positive light for the previously-only-child. But the upshot of this book is that it is part of the brilliant Mercer Mayer’s Little Critter series (give it a quick googling if you’ve never heard of it). It is specifically gendered: Little Critter is a boy, and the new baby is a girl, but I think it’s a good thing to have a book where a boy is excited about the new baby. Good for ages 3 to 7.

Not every child is excited to welcome the newest member of the family. This is understandable, and it’s important to acknowledge these negative feelings and let a child give vent to those emotions without dismissing or repressing them—to do otherwise is a good way to make a child resent their new sibling. In this book, Darcy doesn’t like the new baby, and everyone tries to tell her that she should or that she’s wrong to feel the way she does—everyone except her grandmother. Good for ages 3 to 7.

This book deals with getting a new sibling via adoption, which is its own emotional can of worms. 7-year-old David, who is also adopted, is very trepidatious when he learns his parents are adopting a second child, this one from Korea. Beautiful, poignant, and hyper-realistic in both story and illustration—like most of Eve Bunting’s work—it is perfect for its purpose. Good for ages 5-8.

This book is also about adoption/foster care, but deals with a different problem, one a little less popular to discuss—rejection by the new sibling. Emma is totally psyched to be an older sister and meet her new adopted brother Max, but Max doesn’t like her. He doesn’t like the cookies she baked him, and he thinks girls are yucky. How can she be a big sister to someone who doesn’t seem to want one? Getting a new sibling that isn’t a baby can be very challenging—for both children—and this book is good for approaching that issue. An I Can Read Level 3 book.

This adorable picture book by Mr. Henkes is useful for teaching older siblings to appreciate their younger siblings, which is something older siblings often forget to do. Sheila Rae loves to show off her bravery and boldness, and frequently mocks her little sister, Louise, for being a scaredy-cat (or scaredy-mouse, rather). But then, when Sheila Rae gets lost taking a new route home, it’s Louise who comes to big sis’s rescue. Good for ages 4-7.

No Fighting, No Biting

An oldie (written in 1978), but a goodie, and my personal go-to book for teaching siblings the importance of getting along and working together. My own mother used it on my sister and me. A story within a story, poor beleaguered Cousin Joan can’t read her book with Willy and Rosa fighting and bickering all the time, so she tells the siblings stories of two squabbling alligator brothers whose behavior sounds awfully familiar. An I Can Read Level 2 book.

This surprisingly sophisticated middle grade novel is good for older kids who are in a blended family, with step-siblings or half-siblings. It’s also good for older kids with serious sibling rivalry issues. 14-year-old Diggy Lawson has been raised all his life by his single father, and he’s perfectly happy with that. But when classmate Wayne Graf’s mother dies, it comes to light that Diggy’s dad is apparently Wayne’s dad, too. And when the man who Wayne had previously thought of as his father throws Wayne out in a jealous, drunken rage, Wayne comes to stay with his real father—and Diggy has zero chill about this. A great book about learning to share your parent’s love and open yourself to new people, plus you get to learn about raising cattle, which is more interesting than it sounds! Good for ages 12 and up.

Al Capone Does My Shirts

Now this one, you may have heard of. The first book in a trilogy, it deals with the hurdles of having a disabled sibling. “Moose” Flanagan is technically the younger brother, but due to his sister’s problems (the word “autism” is never used because the book is set in 1935, but she’s clearly autistic), he will always have the role and responsibilities of the older sibling. On top of this, every decision the family makes always seems to be for his sister’s good instead of his; that’s why his whole family has moved out of San Francisco and his father has taken a new job—as a prison guard on Alcatraz Island. So now, as if being the new kid and taking care of his sister all during the Great Depression wasn’t stressful enough, poor Moose is sleeping on an island filled with gangsters, murderers, and one trouble-making, manipulative warden’s daughter who’s way too pretty for anyone’s good. Good for ages 9-13.

Gaither Sisters Trilogy, with emphasis on Gone Crazy in Alabama

Oldest sisters often have it especially rough because they are frequently expected to be “mom” when real Mom is gone, and they are expected to shoulder that burden far more often than oldest brothers. There are dozens of novels—good ones—about girls who have to grow up too quickly to take care of their younger siblings, but for this list, I’m advocating the Gaither Sisters Trilogy: One Crazy Summer, P.S. Be Eleven, and especially Gone Crazy in Alabama. Delphine, Vonetta, and Fern live with their father and paternal grandmother; their aggressively unmaternal mother abandoned them years ago to join the Black Panthers (this is set during the later part of the Civil Rights Movement). As the oldest, Delphine has to reign in and protect her two younger sisters, and act as a mother to them. Themes of sisterhood are central to the trilogy, but strongest in the third book, where Delphine and her sisters’ relationship is juxtaposed with her grandmother and grand-aunt’s relationship. Fantastic for exploring sisterhood, the dynamic of having multiple siblings, and the responsibilities put on young girls. Good for ages 10 and up.

This post includes affiliate links. Explorable Places may earn a small commission on things purchased through these links.